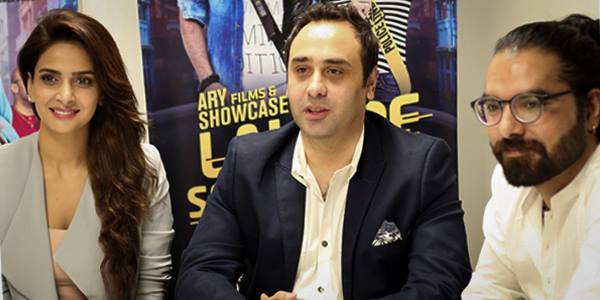 The rapid pace at which our entertainment industry is growing, it won’t be a surprise to say that through the passage of time the Pakistani cinema is only getting better. After the massive success of Jawani Phir Nahi Aani, Janaan, Waar and Karachi Se Lahore – ARY Films is now all set for another road trip #LahoreSeAagey.

The promotions of Lahore Se Aagey are on full swing and the team of ARY Digital had a fun filled conversation with the cast of the movie. To get you all pumped up, we should aware you of the fact that this upcoming rom-com will certainly be your source of guffaws.

Director Wajahat Rauf states that if you think Lahore Se Aagey is a sequel to Karachi Se Lahore (KSL), you’re mistaken. He mentioned that ‘Lahore Se Aagey begins right where Karachi Se Lahore ended and it’s basically a spinoff of KSL – being an entirely different story. The film is based on this odd couple who are travelling together to reach their respective destinations. We wonder how will that go.

Wajahat Rauf gives us some insights about him, care to know? P.S. Like us, he LOVES food!

Spectators should certainly expect to see improved scenery, high-quality music and outstanding performance by the cast that just adds another icing on the cake! Lahore Se Aagey is yet another masterpiece that won’t fail to entertain the viewers. That’s a promise!

Writer/Actor Yasir Hussain shares that the movie is worth spending as they all went an extra mile while working on it. Despite the fact that he had all the ‘boy humor’ in Karachi Se Lahore, he now will throw all those dialogues at the ‘hot chick’ on his voyage. Another surprise that you MUST know is that the handsome hunk – Yasir Hussain might actually consider writing a novel! The writer mentioned how he wrote for theatre earlier as well.

While the interview, Saba Qamar mentioned that she plays the character of a girl who is just out there, ready to explore her horizons. She plays the role of a struggling rock star and already has a boyfriend in the movie. The turn of events leads to that certain boyfriend turning into an ex!

Saba Qamar was absolutely cheesed off with this one rumor. Hear it out!

To quench your thirst of curiosity and find out how the entire plot falls in place, don’t miss out on Lahore Se Aagey! Be a part of this rocky road trip with Tara and Moti!

Hear them out as the fantastic cast sends their wishes for their fans!